The Church of First Responders

Today is the first ever guest blog!! (ring bells, dance around, blow whistles)

My friend Erin (not my sister Erin or my childhood friend Erin, a third Erin) went to Singapore on business. Erin is one of those ones that is too pretty to be funny, so you have to assume they were a late bloomer, which forced their personality to develop way beyond what normal pretty girls have. Her writing is awesome, so I had to get her story to share with you guys! I’ll add my own Editor’s Note in italics for your reading pleasure.

So, without further adieu, I present to you Miss Erin Goes to Singapore.

First and foremost I need to acknowledge that I recognize that I am blessed…incredibly blessed. Not only because I have a pretty awesome family that loves and supports me but because I have an amazing job in an industry that I’m incredibly passionate about that provides me the opportunities to see things that I may not have otherwise seen and go places that I may not otherwise go. Singapore is one of those places. Truth is, I cannot say that I have ever dreamed of going to Asia. I am not quite sure why, (Editor’s Note: What? Not everyone dreams of one day visiting Singapore?) but it is true. Maybe it’s because I worried that I would feel exceptionally tall and pale or maybe it’s because I wondered if there was anything to see. Regardless, it wasn’t on my list but for some reason I jumped at the opportunity to go when it was offered.

To start, the flight is long…like f’ing long. Two hours to Chicago then 16 hours (on a plane) to Hong Kong, then another 4 hours to Singapore. That is a total of 22 hours on a plane. That does not account for layovers or the extra special delays. I left my house at 4am on Wednesday morning and arrived in Singapore just after 2am on Friday morning. That’s a long-ass time. Fortunately I had been able to get some shuteye on the plane. This is not a normal occurrence for me but I knew that I would be arriving very late and need to be up early for my meetings on Friday so I figured it out.

On Friday morning I was to be picked up from my hotel at 9AM and after falling into bed at 3:30AM; this wasn’t going to be easy. Apparently the hotel knew what would be needed to wake me up since I got to run around avoiding freezing cold droplets of shower water since I had no a single DROP of hot water. Skipping the shower was not an option since I had been too tired the night before to take one and the travel slime from my long-ass trip was starting to drip. Showering was a must, so showering I did. It wasn’t until later that I realized that it had been a complete waste of time. The all-day meeting I was to attend was outside and the temperatures in Singapore hover around 982 degrees with 2091% humidity this time of year. So it didn’t matter that I had wiped off the stink and slime in that cold-ass shower because I was quickly replacing it. (Editor’s Note: 22 hours on a plane and heat like that? I can’t imagine why it isn’t at the top to everyone’s Must See list).

My co-worker took us to lunch at an authentic Malaysian restaurant. Now I have always considered myself relatively open-minded in the food department (yes…I know that I don’t like meatloaf, but the truth is that if push came to shove, I would eat it) (Editor’s Note: Meatloaf doesn’t count as a food anyway, you’re good) but when co-worker ordered fried fish skin, I knew that the boundary of my ‘food open-mindedness’ had been crossed. I mean, sure, everything tastes better fried, but those little bad-boys could not possibly have been ok-enough to cross my lips, so (as my Mom would say) ‘it ain’t happening’. The rest of the food, however, was pretty amazing and I didn’t even fling anything across the room with the chopsticks (WIN!).

That evening my co-worker took us to dinner. He took us to this amazing restaurant right on the water overlooking the casino. See? 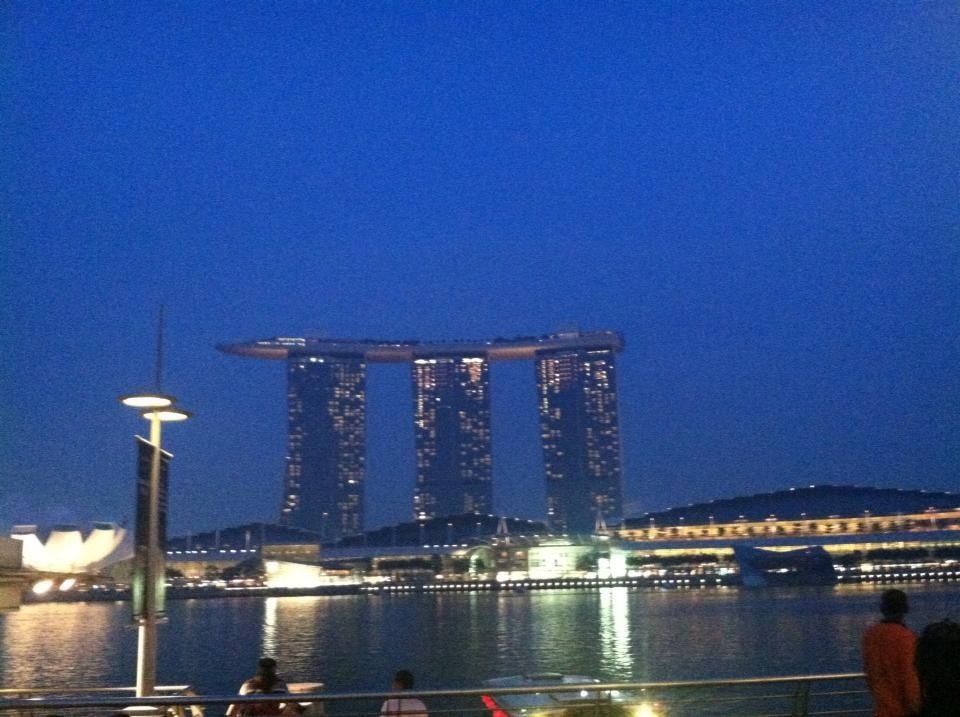 He ordered more yumminess to include peppered and chili crabs (um, HELLO!). I’ve never been a fan of cracking those bad boys open on my own (lots of work; little return) but I sucked it up. It was here that I learned a lot about Singapore that I didn’t already know (which wasn’t hard since the only thing I knew before going to Singapore was how to spell it and that it was in Asia…). I discovered that this little gem of an island is actually quite interesting. Here are the cliff notes.

*Please don’t make me source this…just assume I got it from somewhere credible.

On top of that, they have a toll meter on their dash and are not only charged a boat load for all parking but are even charged to go through some intersections. The Singapore government is really not a fan of so many cars and makes it quite tough to be able to afford one.

On top of some of the crazy roads and prices, their laws are entertaining at best and scary at worst.

After wandering around the city a bit, I caught a cab to the airport. Upon getting in the cab, the Singapore friendliness showed through immediately when the driver asked me how my trip had been. I do not know his name, but I have decided to call him ‘Ting’ mainly because the sound ‘ting’ gives me an experience similar to the one I had with him…refreshing, appropriate, gentle (Editor’s Note: I’m pretty sure the word you’re looking for that describes those things is ‘Sprite’).

Ting and I are chatting and he starts to tell me more about Singapore. He explains that he lives quite far from the city in a 4 room (not 4 bedroom…4 room) flat that cost him $180k(Singapore so it’s $145k US) 9 years ago. He said that he works 6 days a week for 12 hour shifts at the airport in baggage handling and then drives a cab on his one off day on the weekend. He explained how it is important that he works hard during this cab shift to make good money to bring home to his family. His wife also works 6 days a week for 12-hour shifts and between the two of them they bring home about $2500US each month which is just enough to scrape by. They cannot afford to own a car or go on trips and must pay to send their kids to public school and pay for healthcare (not subsidized by the government). Upon learning that I was from America he started asking me about LA. It was cute to watch how starstruck he was with the idea of LA. He asked me if traffic was bad (um…yea), he asked me if it was expensive (um..comparatively? No) and then he asked me if the people of LA would be nice to an Asian man from Singapore (I skirted around this one). He said that he has always dreamed of going to LA and asked me if I ‘boomp into stas on da stree’. It took me a few tries to figure out that he was asking me if I bump into movie stars on the streets. I explained that it is common in LA but not really where I live although it was pretty clear that his perception of the distance between LA and Denver was quite different than reality. He then asked if the stas were heavily guarded or if they were like regular people. When I explained that they were like regular people his eyes wandered into his dreams of finding out in person someday.

Shortly after this conversation ended we arrived at the airport. He helped me unload my bags and then kindly handed me my receipt faring me a good journey. I found myself wishing I had withdrawn cash from the ATM because I would have liked to have shared my blessings with him. He wouldn’t have taken it since tipping in Singapore is not customary and Ting was too proud to accept but perhaps even the gesture would have assured him that the people of LA (or Denver) would have been nice to the Asian man from Singapore. He stayed with me in spirit through the airport, on the plane and to my hotel in Thailand. I realized that I have a lot to learn from Ting who after at least 6 days of working straight was nice to the pale chick in the back of his cab and proud enough to share a bit of himself and the place that he calls home. I also realized that things are not always as one may perceive and whil Ting’s vision about what it would be like for him to visit America one day may not necessarily align with reality, it is his dream that makes him happy and keeps him dreaming…and who am I to tarnish that? I’m not sure that there is much else for me to see in Singapore so would not need to return if not needed. I do, however, hope that I left a little bit of me there…and if not me then maybe America…by being a kind, tall, pale chick? Regardless, I am certain that I took some of Singapore with me. Besides the yummy food (chilied crabs? HELLO!) (Editor’s Note, redacted because it was totally inappropriate), there is so much more. Singapore is so rich with culture and traditions and while it is difficult to maintain a life there (in my own opinion, I suppose) the people are happy and kind and, most importantly, feel safe. So while Ting may not have the job of his dreams or own everything he has ever dreamed of, he is still dreaming and enjoying what it is that he does have knowing that he can support his family enough and that they will be safe. Dream on, Ting (or whatever your name is, sweet man). I hope to boomp into you in LA someday, and I promise that I will be nice to the Asian man from Singapore (and everyone else for that matter).

(Editor’s Note: Erin is in Thailand, so I’m nearly positive that more stories will be forthcoming, due to her confusion as to the purpose of a window in her shower that looks onto the bed).