It’s a Bird, It’s a Plane, It’s a Post About Redecorating!!

The Story of the Wedding Dress

Oh, the wedding dress. I bought it before Hubbin had even proposed; MONTHS before he’d proposed, actually. I went with a friend just to be silly, and there it was; totally different than I ever thought I’d wear, and on a clearance rack. I grabbed it along with a few others, and started trying on dresses.

The very effeminate man working in the boutique that day made the obligatory oohs and aahs until I stepped out in The Dress, and he clasped his hands over his mouth and said “Oh honey, that’s the one”. And it was…it SO was the one. I bought it that day. I knew Hubbin would propose one day, and I knew that was my dress. 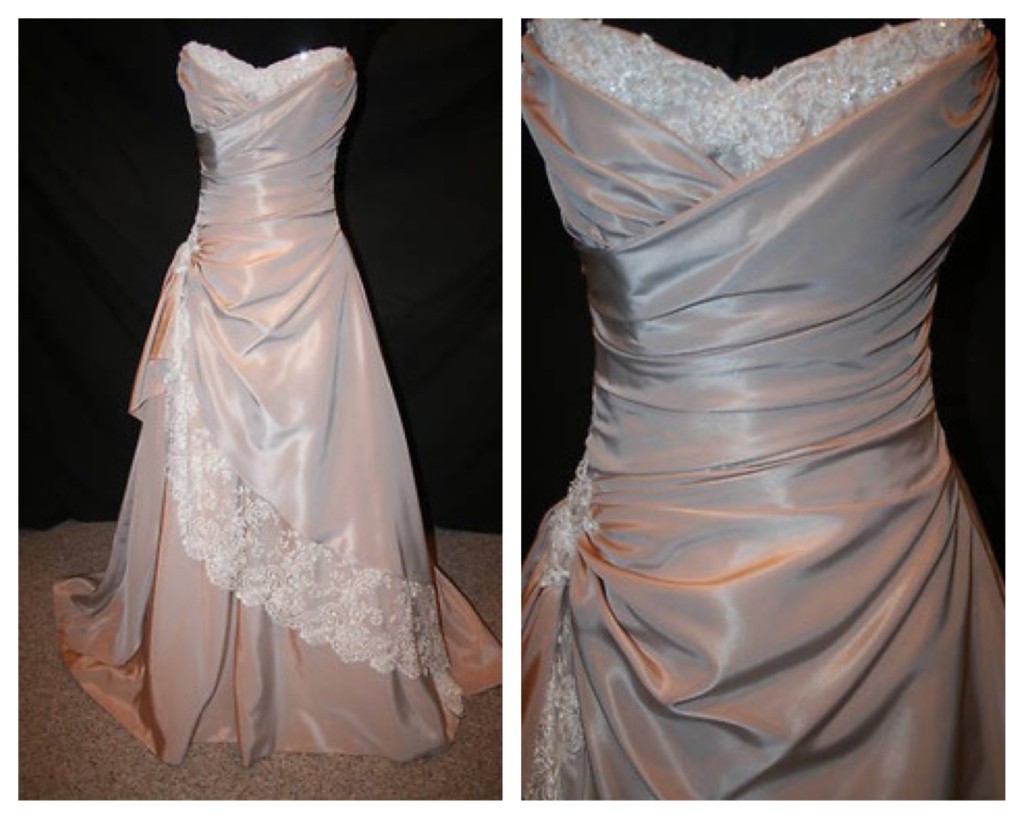 There wasn’t any point in getting white; my kid was there, the jig was up.

It hung in the closet, and that cold Thanksgiving night, Hubbin proposed. I gazed at my ring and peeked at my dress, and couldn’t wait for the day I would wear it.

Two months later, I lost my job – and my insurance. Facing some significant health issues, Hubbin and I decided to just go ahead and make it legal at the courthouse and plan the ceremony down the road. After a while, it looked like that would never come. He worked out of state, and I had a job where I traveled a lot, and so, with great trepidation, I placed the dress up for sale. Not long after, it had a happy buyer.

And not long after that, I had total regret. We went ahead and went through with the ceremony, planned super quickly since I had to ship the dress (the buyer was fine with doing it that way). The morning of our wedding, it rained – hard. It finally stopped, and the sun came out, and we had our ceremony. I shipped the dress out immediately.

And then the pictures came back – and not a single one of Hubbin and I came out. Since it was sunny, with some clouds, our photographer hadn’t changed the scenes. Out of 200+ pictures taken, not one of the ceremony came out. A couple came out afterwards, but they weren’t great and needed heavy editing to look even moderately passable. Later in the day, I had the photographer shoot some of me laying in the grass, and they turned out really well and were the only ones that actually worth keeping. The photographer felt horrible, and I was devastated. The dress was gone, the pictures were ruined, and there was no way to recapture it.

I’ve spent the last five years looking for that dress, but it wasn’t easy. I contacted the girl I sold it to, wanting to buy it back, but she had altered it to 5’1″ and sold it to someone else after she married in it. I put an alert on eBay to no avail. In 5 years, only 3 have sold on eBay, and they were white, not cognac. I even reached out to the designer to no avail. It was pointless; I would never find it.

Last weekend, I googled again. Maggie Sottero Angel – results, but all were sold. I googled a ton of different phrases, and then, buried down in the depths of the pages was a website – a bride that had bought it but not worn it – selling it. In cognac. In my size. In 2009. And no contact information.

Undeterred, I hunted until I found her email address – an AOL address. Surely there is no way this is still a valid email, but what have I to lose?

I found your website while searching for that dress you listed as for sale. I figure it’s long gone by now, but wanted to see if there’s was a chance you still had it.

And the next day, I opened the email to this:

Yes miraculously I still have it

I gasped. Could it be? Yes, it could, and miraculously it was. Hubbin and I have wanted to renew our vows since last year, but we never quite got it together – the timing wasn’t ever right. And now I know why – I had to get The Dress again.

It’s being shipped to me on Friday, which just so happens to be the five year anniversary of the day I wore it at our wedding. This story isn’t one I could have ever dreamed up, and I cannot wait until the conclusion – this time with several photographers to ensure that not a moment goes uncaptured.

I love a happy ending.