A Party Ten Years in the Making

The Oldest One’s father and I separated in 2005 when she was five months old. Like most divorces, it was contentious, and a lot of bad choices were made on both sides (mostly the in way I reacted to things). I’ll admit that it’s not easy to share custody of an infant, and I most certainly didn’t make it any easier. There were times that it got easier, but mostly it was hard.

Luckily, we both always loved her more than we hated each other, and that has always made all the difference. She’s been blissfully ignorant about the contention at most times (it never lasted long, but, you know, if you don’t get along when you’re married, you definitely won’t when you’re divorced). It got much easier when I met Hubbin and he met the woman I call The Best Stepmother Ever, though I’ll shorten it to Rhea on the internet.

It’s been really good for a while now, and to her father’s credit, he has always worked with me on times that the schedule needed to change, or I accidentally scheduled things on his time, or she needed to see the doctor and I couldn’t take off work (actually, I think he’s taken her to almost every single appointment she’s ever had). Mostly it’s been good because Hubbin and Rhea have calmed myself and my ex down and made us acceptable human beings.

It’s not easy to raise your child in two homes; there are a lot of things that are hard emotionally. Your kids miss things, or someone else gets to experience those benchmark moments in a child’s life that you expected to experience yourself. One day last summer, as I drove down the road, she told me that she loved her stepmother so much that if someone asked her who she loved more, me or her stepmom, she wouldn’t be able to decide.

I will fully admit, though never to her, that for a split second, it took my breath away. For a split second it was really hard to hear my oldest child describe another woman that way…but really, only for a split second. That thought was immediately replaced with thankfulness that she had someone who loved her and whom she loved so much (and honestly, a woman that I care so much about). What a blessing to get two mothers and two fathers who love you and will fight to the ends of the earth for you.

For The Oldest One’s 10th birthday, she wanted a tea party – girls only. I called Rhea and asked if she would like to come, and help decorate if she wanted to, and she gladly accepted. We arrived there and decorated, and, had a wonderful time with her closest friends. 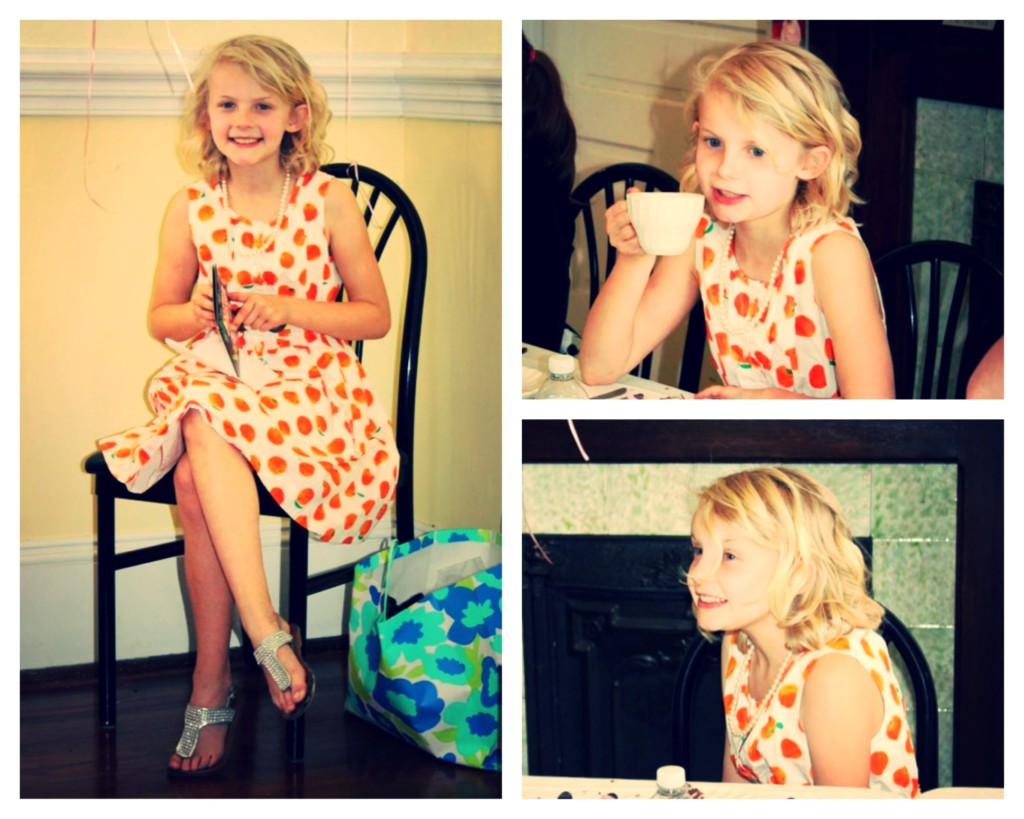 Yes, she’s really 10, and yeah, what happened to the awkward phase?! 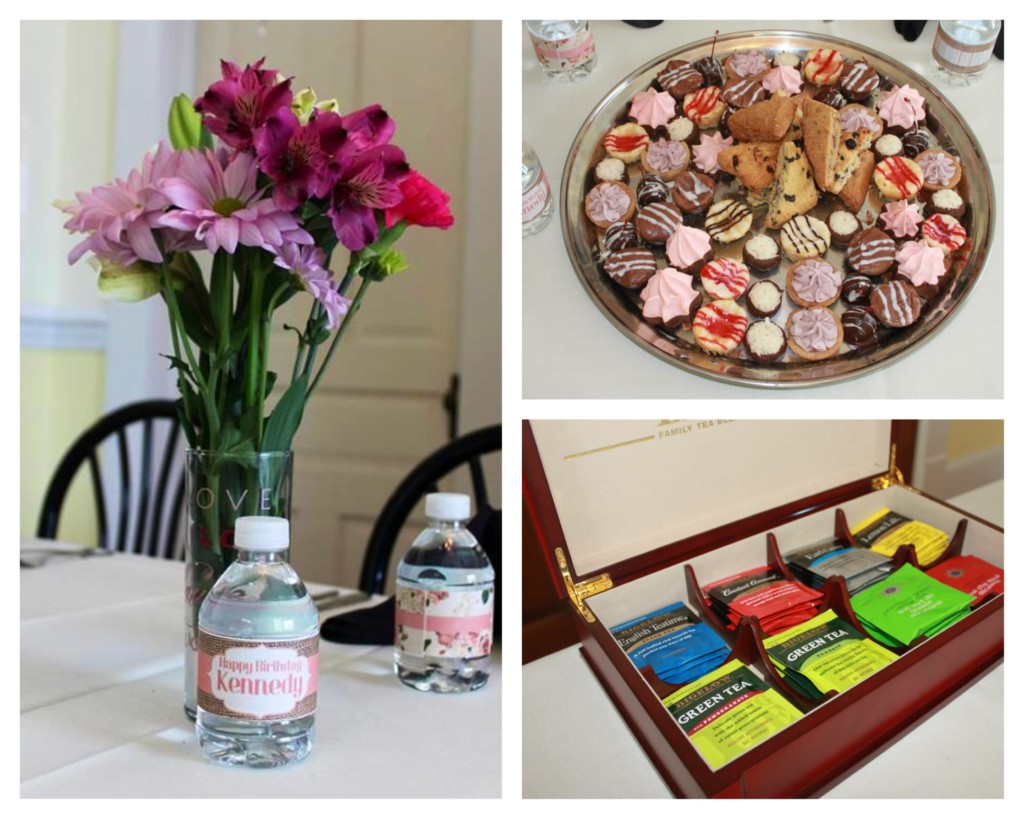 Unbeknownst to The Oldest One, our husbands were planning to make an appearance, and this old fashioned tea party was about to be…crashed.

But, like I said, it was girls only. So, they stuck to the rules, and they arrived in this garb. 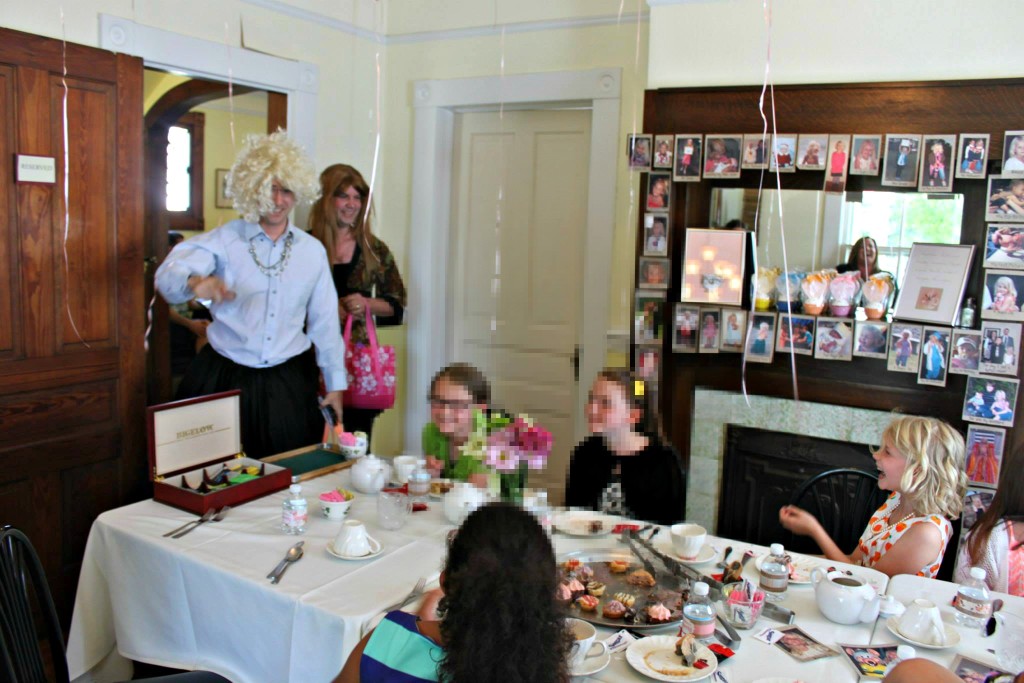 Hubbin is not a great blonde.

It was…priceless for sure. We all had a wonderful time, and she could not have been more surprised. Before we left, we took one picture of all of us – The Oldest One with the four people who are teaching her on a daily basis lessons that cannot be taught simply through words, but through works. 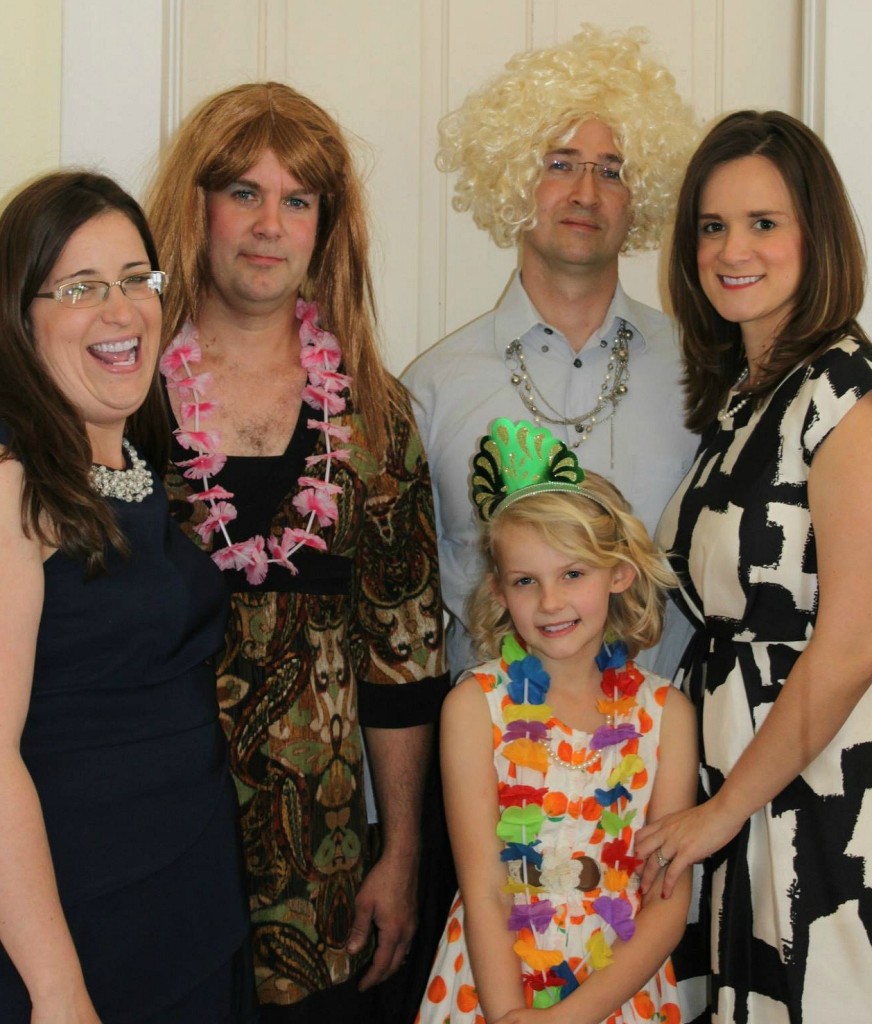 Rhea & The Oldest One’s Father, Hubbin & The Lacky Mom, and the kid that’s so special, she gets four of us.

There were times that I thought that there was no way this could ever happen; that there had been too many fights, too many hurts, too many painful words. In fact, I distinctly remember a time where I was standing in the dining room, holding my phone, and I looked up at Hubbin and said somberly “It will never be the same; it will never be ok again. No one can come back from this.” Thankfully, I was wrong. To anyone who is going through the same thing, please know that nothing is impossible if you work for it. Nothing is impossible if you want it – and you have to want it for your kids.

This picture seems miraculous, and in ways it truly is. Four people focused on what is best for this child, and through that, a child that gets to experience the fruits of that. Love it.