I hate this bathroom. 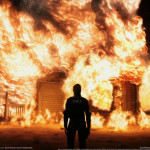 Ok, so we stayed on vacation an extra day because the contractor let us know that the bathroom wouldn’t be done in time. This was expected for a few reasons, one being that the “little bathroom renovation” turned into like…rebuilding a house. The floors were saturated in “things that had leaked” which is what I will term it because just trust me. The walls behind the shower surround were crumbling and covered in black mold. It had to be completely rebuilt. In fact, it was in such bad shape that it was almost a downstairs bathroom.

We had a great trip back, to be honest, especially considering we had Grumpy Toddler in the car. It’s amazing what two iPads, a dual screen DVD player with 12 DVDs to choose from, books, crayons, a big sister, barbies, baby dolls, and a Daddy that will sit like a pretzel just to hold a toddler’s hand will do. Whatever, it worked and I should probably be ashamed but I am not because we all got back alive and really, that’s my job as their mom.

We made excellent time, too. We had told Daniel that we’d be back around six, and I didn’t consider that timeline I’d given him when I made great time and arrived at four, to a house in complete disarray (also known as a construction zone). The bathroom was not nearly done. Looking back, we should have immediately left and come back later to get out of their way. Instead, they scurried to get it cleaned up and get out of our way. They offered to set the toilet but the floor wasn’t grouted and hey, who needs a toilet anyway? I lugged the kids back into the car (though not until The Oldest One had found herself up a tree and face to face with a volleyball-sized hornets’ nest and some really awful stings) and drove to my parents where I showered and prepared for work the next day. The toilet is currently in the living room, and so is the vanity and the bathroom door. I won’t lie, either…the bathroom looks so big with no door or furniture. I’m jealous.

What is done is stunning. He put the vertical mosaic tile in the exact spot I wanted it but couldn’t describe (I’m sure he really appreciated that). He also gave me the ledge I wanted really badly. The floors are going to look amazing – the tile was set but not grouted yet. The picture above is a little sneak peak for you guys in the meantime. It definitely is a different bathroom!

I’m not going to lie, though, I really hope that when I get home tonight, the toilet is in the bathroom.