And now, a bathroom break (or a break FROM the bathroom)

A Bathroom Reno, in GIFs

Contractor Extraordinaire Daniel refuses to to acknowledge his awesomeness, but I came home last night and our bathroom was pretty much done. To put that into perspective, our toilet was in the living room two days before this picture was taken. 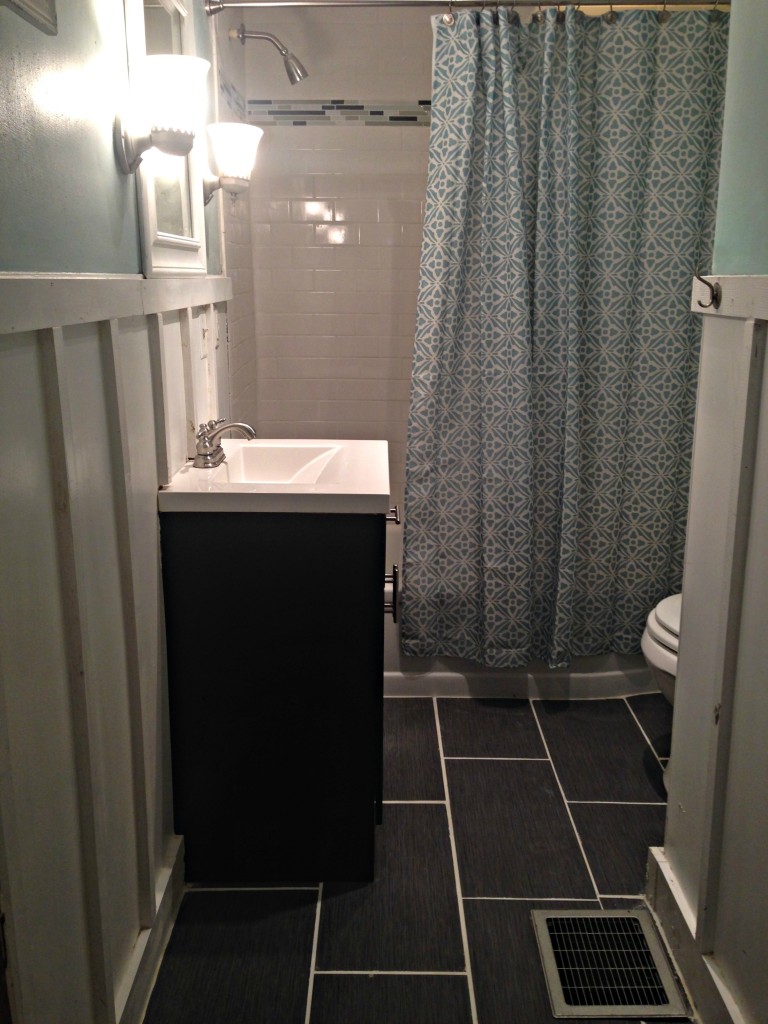 I’d give you details, but the bathroom isn’t done and still needs finishing touches. There is an inch of dust over everything (I am not even lying, I mopped the walls last night), and there’s remaining grout work that was curing behind that shower curtain, which will also soon reveal one of the major changes in the bathroom, too. In fact, during that first “Houston” phone call and hearing the words “black mold” and “the standing water under the floor was deep enough to splash”, Daniel adding “but you get your [surprise]” was the only thing that kept me from throwing myself off the mountain.

This should have been an easy job…throw down some new flooring and pull down the shower surround and put up tile. Except for the black mold and rotting subfloor and how we almost had a basement bathroom it was so bad.

It also rained pretty much the entire renovation (not for us, because we were in paradise while they were stuck in Renovation Hell). Rained constantly – it was in almost every single Facebook post I saw that week, and at least three people considered building an ark. When we realized how badly things had gotten, I’m not even kidding when I say I 100% picture Daniel like this on my lawn:

Then, of course, when we got home on Sunday and I was tired because hello, six hour car ride with the Grumpy Toddler, there was ensuing no toilet, hornet stinging chaos.

And Monday when I got home and it wasn’t done because they were making sure everything was perfect, I acted poorly and had to apologize a couple of times because hello, I’m supposed to be a grown up even if my butt doesn’t fit on that ladybug potty I had to use.

And also, I’m the one that told him not to set the toilet until the floor was completely done anyway, but I conveniently forgot that during the moment that led to this meltdown:

But it came together and the toilet went into the bathroom and the shower could be used and it’s beautiful and you’ll know a lot more when it’s super-duper done and I can show you all the cool things. Until then, here’s a gif of me arriving home yesterday and seeing the bathroom:

Details, soon. The best part has yet to come!!