The Office Again. Y’all, I can’t even…

Get your popcorn, y’all; it’s long and it’s taken me 3 months to finish it.

I haven’t thought about this in a long time, which is why it seemed odd when it kept coming back to me, replaying itself over and over in my mind. Something tells me to write about it, so here we go.

I started this blog in 2012. At first, it was going to be about home renovation, and then it just…morphed into parenting and cooking and whatever else was on my mind. Back then, I posted about parenting and fixing the house, and I had more viewers than I thought I would. I attempted to cultivate a persona of what I thought wanted to be read, and I wrote to that demographic. I posted things that weren’t very politically correct, but I didn’t care because it was funny and it made people laugh. And I love to make people laugh.

I also serve at my church, in the nursery. I snuggle little babies during the third service, because I can breathe in their baby-ness and it satisfies that part of me that thinks, randomly, that we should have more babies (we shouldn’t). Karen, my dear friend that oversees all of the children’s ministry, called me into her office one day to talk. Very softly, she started talking about this blog. She complimented my writing and said that I had a wit about me, and that I was transparent enough in my writing that it felt as though I was telling the story aloud. And then she mentioned my nickname for Grumpy Toddler at the time – The Little Jerk, and the picture on the front page of the site. She wasn’t negative or condescending, but instead gently suggested to me that I should consider if that was an accurate picture of who I really was. Nothing more, nothing less.

Sitting there, I felt my neck stiffen and my jaw clench, and I struggled to remain composed, sitting in front of this gentle woman who had been so right this entire time, only to be so very wrong about this. Every part of me flashed hot and I fidgeted in my seat, trying desperately not to start yelling. I squeaked out that the blog was a representative of me. She said it was funny, like me, and witty, like me, and interesting, like me, but it seemed like I was holding back the parts of me that are gentle and loving. I responded that people know I’m not a passed out drunk that calls her kids names, and she readily agreed that it was very obvious when you were around me that I was NOT that person – and then asked me to just consider what it might look like to a parent. Would they know that the woman they were handing their small infant to–the one with the pictures online of herself passed-out drunk and calling her kids jerks–wasn’t the person they portrayed, because they wouldn’t know me enough to realize that what I was painting was essentially an internet persona?

Karen never, at any point, told or asked me to take anything down or change the way I wrote (in the past or in the future); she asked only that I consider reading it from a stranger’s viewpoint. Still angry, I spat back at her that I’d take the entire site down before I would ever write a Christian blog – despite the fact that she wasn’t saying anything like that at all. As she struggled to explain that the conversation was taking a turn that she didn’t intend it to, I topped it off with a “if it’s such a problem, I’ll just stop serving. I’m not going to change who I am”. It was obvious that she was genuinely upset that what she said and what I heard were glaringly different, and she looked defeated and sad. She did say, before I walked out, that she didn’t want me to change a thing about myself, that she loved me very much, and that she was sorry that her words had hurt me. She wished only that everyone could see the Kristin that she saw.

I drove home, admittedly furious. How dare she? This is ME. And I got home and came to this site, and caught a glimpse of the logo, which at that time was a martini glass. The front page boasted a staged photo of me with a bottle of vodka in my hand, wearing a Santa hat, and pretending I was passed out – entitled “Feliz Vodkadad”. I’d never in my life even had a martini, I just couldn’t think of a logo, and the smell of vodka actually made me ill. As I read through my posts, I felt disconnected from the author. This writer was kind of me – but it was me mixed with who I thought you guys wanted me to be. 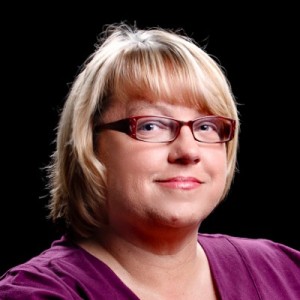 In truth, I had made these strides in my personal life, and I’d grown closer in my walk with Jesus, but that just…didn’t jive with what I wrote, so I didn’t write about it. It was at that moment that I wrote this post; baring my soul and revealing who I really was. It wasn’t forced; it was me, and that was a little scary. I realized as I wrote that that the biggest part of “me” is someone who is redeemed. I didn’t start writing posts including God because of that talk with Karen; I just dropped the internet persona and started talking about ME. And ME…is someone who is very, very much saved by Jesus. I’m still funny and quick witted. I still have times that I know “I should have stopped talking 10 minutes ago”. I still want to red-pen the majority of things on the internet, and I’m still working on my language. Hubbin made all the swear words autocorrect to “love” in my iPhone, so it really takes an added level of effort if I really want to sound badly. I am still me, I am just MORE me. I don’t purposely write posts about Jesus, they just seem to work themselves in, because He is in ALL of my life. Some days, it’s much more apparent than others. I will promise you this, though; it is, and never will be, forced.

I began this post in November, and am finishing today. As of today, I am 623 days alcohol-free, and 424 days smoke free. I am healthier. I am busier (hence the 3 months it took to bang out this post). Most of all, I am improving. Up and to the right, and that’s all I can hope for.

As for Karen? God I am so grateful to be surrounded by people that will pull me aside and say “Hey, I’m worried about you. Is everything ok?” because most of the time, it’s not. And I just don’t reach out for help very well. I think a lot of us are like that. I pray that you are surrounded by people that reach out when you may not be doing so well. Truthfully, I was in a really, really dark place back then and no one knew. I thought I’d hid it really well, too. Thankfully, I had Karen.

So Karen, this one is for you. Thank you for knowing me, thank you for loving me enough to want me to share it all.