So this year was more emotional for me during Christmastime after I heard Andy Stanley say on a podcast that one of the reasons we know Jesus was real is because no man would create a story about God coming to Earth in the flesh as a baby. I’d heard that a few times, but it sunk in with significance this year, and I let myself feel the weight of it. 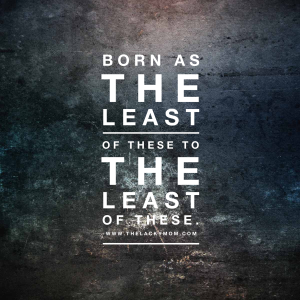 That story truly is no man’s creation. We know that by the movies we watch and the visual we get when we think of a King. More Goliath sized than David, for sure. Our Savior, the one we create, isn’t born to scared yet faithful parents, but instead comes in a fury. He appears to us from a storm, and he comes with a vengeance with no mercy. He is strong and powerful. He isn’t born in the dirt.

And more than that, the Savior that mankind creates surely doesn’t ride a donkey and hang out with lepers. He doesn’t stoop down in the dirt with an adulterer and draw in the sand. He doesn’t wash feet. He doesn’t bypass faithful leaders to go to the sick and the poor.

You see, we know that the Savior we got wasn’t the Savior we would have chosen if with no other proof than the way we act ourselves. We want recognition for the good deeds we do. We want to know that the better we are, the more we know, the more favor we will have from God. We need to know that if we follow the rules of the Old Testament, we are safe. We want a Savior who will smite those who sin against us. Jesus gives us none of that.

Jesus himself was the antithesis of the Savior we would have created. We would have created a king with clear and easy rules. Pray for those who persecute you? No thanks. Love without keeping score of wrongs, no matter the circumstances? I’ll pass. God in the flesh, if created by man, would not have died on a cross meant for thieves and common criminals. Man would not have created a servant Savior that instructed them to follow Him – especially if following Him meant doing things that man would fail daily trying to do.

He was the exact opposite of what mankind would have created, yet precisely what we needed. Jesus is no fairy tale, because fairy tales aren’t made from characters such as He.

The weight of this understanding transformed Christmas for me. I hope you had a beautiful, wonderful Christmas that was full of the magic and wonder that this season truly signifies.