The Marriage Retreat (and why I should never pack)

The Marriage Retreat this year was much different than last year in many good ways. Some of this is funny, some is poetic, and some is spiritual, because, well, that’s the point of the retreat.

I packed for the retreat the night before, and Hubbin has repeatedly asked me not to pack for him, so whatever, I didn’t. I packed most of what I could the night before, because I had to work the next day an hour in the opposite direction of the already 90 minute away location. I worked, got off a bit early, grabbed a few things from home, and set on my way.

Hubbin was already in The Middle of Nowhere, where the retreat was, so I met him (and our table group) at a restaurant close by. We ate and arrived at the retreat, which is a motel-type conference center that is about 50 miles past any civilization that you would be comfortable stopping at. No television, no cell service, just…y’all. It’s stunningly beautiful there, though, and they have this phenomenal Chef named Cody that makes THE BEST food ever.

END_OF_DOCUMENT_TOKEN_TO_BE_REPLACED

I wrote this a couple of weeks ago but had to wait until we were all emotionally stable enough to post it. 😉

I was thirteen when my sister told us she was pregnant. I loved my big sister so much, and I watched her struggle through a pregnancy that was both physically difficult and emotionally impossible. My already strong sister transformed into from a scared teenage girl into an even stronger woman, right before my eyes.

I remember feeling that baby kick and being in awe of the miracle growing inside of her. Morning sickness was an understatement; she had hyperemesis so severely that she was frequently hospitalized for dehydration. And then it was time. Without a drop of pain reliever, I watched her deliver my niece. She was this beautiful child, and I knew at that moment, life as we knew it was forever changed. 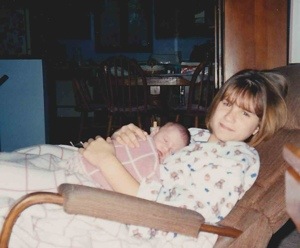 Ashley was a beautiful, easy child. She was friendly and easy going, and I watched her that first summer while my sister worked. We played dress up while I took pictures and I loved snuggling her.