Category: Not My Best Moments Stuff

One of my friends said it seemed like Love it or List it and that’s pretty accurate, except Daniel is way smarter than Hillary, thank The Lord.

We were on our vacation paradise when I saw a missed call at 11AM from Daniel, our contractor, which is like…never a good sign when they know you are on vacation on a mountain paradise. I called back, only to hear the words “black mold” (SCREEN YOUR CALLS, READERS) and I almost hit the bricks. It was more involved and luckily we trust him and he’s wonderful, so we put it in his hands. Also, we are six hours from home and that’s the only real option.

He sends me these pictures because I have asked for the worst and he obliged with these:

At nearly 4PM on Thursday, I get a text that says

Your entire sub floor is saturated with water. Have to pull it all up and replace. The mildew smell is horrible. Trying to ventilate the house as much as possible. Oh remodels…never as easy as you think.

END_OF_DOCUMENT_TOKEN_TO_BE_REPLACED

It’s pretty obviously not done, but I got lazy. I also bought a carpet but I’m nearly positive I don’t like it and it’s not even unrolled. So, it’s pretty plain.

I stained it WAY too dark, though, and I don’t like it. I want another one but Hubbin saw me buy bathroom paint the other day for to redo the bathroom again and his head exploded, so then I had to clean that up. I also didn’t even bother to clean the dining room up before these pictures, so this is probably one of the laziest posts I’ve done thus far. It’s not staged. It’s not pretty. I hate everything but the curtains, which of course were from Lowe’s, like everything I get.

END_OF_DOCUMENT_TOKEN_TO_BE_REPLACED

I need to sit down and write, because it’s cathartic for me. There are so many words, wrought with exhaustion of so many kinds, though, that the thought of sitting down at the computer makes me want to scream.

These last few weeks have been hard. Really hard, in various different ways. I think this season is hard anyway, though I refuse to let it overcome me anymore. It hasn’t been the season itself that’s been hard, but that it’s been wrought with so much death and loss this year, and the reminder of my grandfathers death, which happened a year ago yesterday.

And our server crashed at work, which, unless you’ve been through that, you really cannot fathom the stress surrounding it. The last two weeks have been completely tied up with what/how/why and thirty people wanting updates, and understandably so. It’s just been draining; there’s been no time for anything, let alone Christmas cards. And as odd as it sounds, one of the things that always keeps me sane is listening to Christian radio…but all they are playing now is Christmas music, which I can’t stand. I found out more bad news before leaving work yesterday and it was the last I could take. And so, sitting alone in traffic, I realized there was no better time like the present to just let it out. And I did.

END_OF_DOCUMENT_TOKEN_TO_BE_REPLACED

The Marriage Retreat (and why I should never pack)

The Marriage Retreat this year was much different than last year in many good ways. Some of this is funny, some is poetic, and some is spiritual, because, well, that’s the point of the retreat.

I packed for the retreat the night before, and Hubbin has repeatedly asked me not to pack for him, so whatever, I didn’t. I packed most of what I could the night before, because I had to work the next day an hour in the opposite direction of the already 90 minute away location. I worked, got off a bit early, grabbed a few things from home, and set on my way.

Hubbin was already in The Middle of Nowhere, where the retreat was, so I met him (and our table group) at a restaurant close by. We ate and arrived at the retreat, which is a motel-type conference center that is about 50 miles past any civilization that you would be comfortable stopping at. No television, no cell service, just…y’all. It’s stunningly beautiful there, though, and they have this phenomenal Chef named Cody that makes THE BEST food ever.

END_OF_DOCUMENT_TOKEN_TO_BE_REPLACED

So I stopped called The Little One “The Little Jerk” because I didn’t want people to think I actually think kids are jerks, let alone my own kid.

This morning’s experience convinces me to perhaps rethink that, though. This morning, as I was getting out of the shower, she came into the bathroom and stood there pointing at me and SCREAMING “EWWWW!” no less than 10 times.

I may have stooped to her level when I hollered “IT’S YOUR FAULT I LOOK LIKE THIS!” before evacuating her from the bathroom.

Luckily she had no idea what I was saying. And she had no room to talk, either; with her freshly washed hair before bed and the scowl on her face, she looked just like Nick Nolte’s mugshot.

Today’s thought of the day? May the rest of you bear children that aren’t horrified at the sight of you.

Middle school was not easy for me, for several reasons, but mostly because I looked like this: 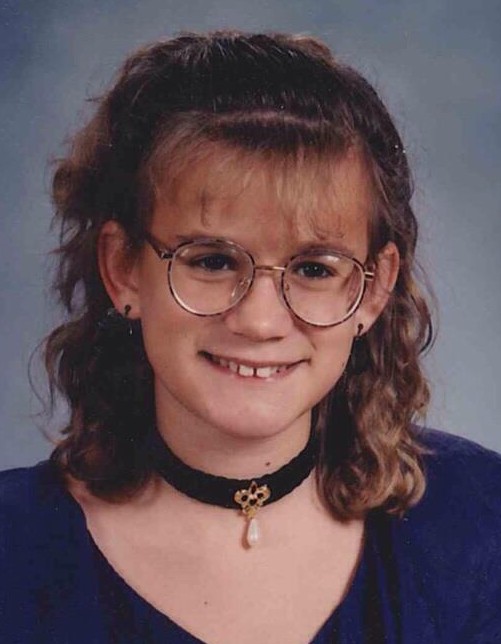 I have blocked out most of it, because it was awful. Y’all think kids are mean in general? Try looking like that. I was 11 in that picture! Awful, though I did learn very early on that relying on my looks to get me through life was not going to be an option. Some stuff stays with me, like the octave my sister used when she sang “Bucky the Beeeeaaaaa-vah!” to me, or when my mother would ask me after a dental visit if they flossed between my front teeth with a rope. Yes, these actually DID happen.

So my oldest, the angel, is in third grade. She’s beautiful and will have none of the same issues that I had, and for that, I am simultaneously grateful and jealous. Her white-blonde hair and striking blue eyes make it obvious that she’s a combination of our best features, but put together in a way that allow her to look like neither her father, nor I.